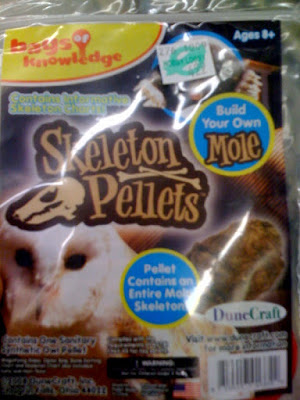 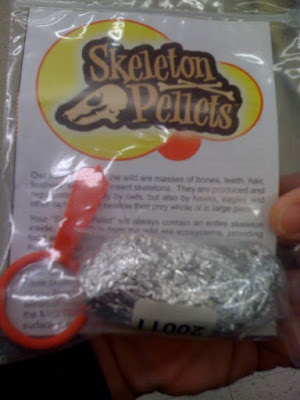 I was minding my own business this morning, happy as a clam when suddenly the skies grew black, the earth trembled and a hellish light drew my attention to this.
Owl poop.  Wrapped in tin foil.  And you're supposed to dig around in it to find a little mole skeleton and put it together.

I think I threw up a little in my mouth.  I'm going back to bed and try this day over again.
Concocted evilly by Mr. Macabre at 12:10 PM 10 comments: 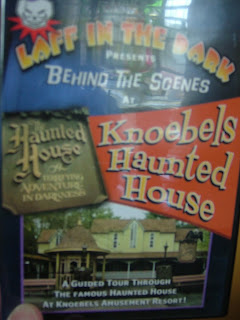 When you talk about the Haunted Mansion, or any other attraction that you board a car and ride through, you are essentially talking about a 'dark ride'.  Vintage dark rides are very few and far between now, even though the high tech ones (Disney's Haunted Mansion, Tower of Terror, Snow White, yadda yadda yadda...) continue to thoroughly amaze, amuse and in some cases evacuate some bowels.  This is a DVD that goes behind the scenes of one of the vintage dark rides, Knoebel Amusement Park's Haunted House.

Built in the early 1970's, this dark ride has changed very little in the past 30 some odd years and there is a wonderful crude, primitive quality that could only be described as 'old skool' (is that how the kids say it? &%$# I'm getting old!).

Basically, you are given a tour backstage of one of America's few vintage dark rides.  In these post-recession times, many family-owned amusement parks have folded including my beloved Miracle Strip Amusement Park in Panama City Beach Florida with their own haunted dark ride that is now probably a strip mall or worse, condos (shudder!).  There are interviews with the owner of Knoebels and maintanence crew members that walk you through the gags.

My favorite parts are of course the behind the scenes.  No digital this, no computerized that, no mp3s, this is pure old fashioned haunted fun sitting in the seat of a Pretzel Car.   The characters are sculpted mostly from paper mache, and the gags are triggered by simple switches activated by the cars.  Some are gags from Funni-Frite company are still in use, still scaring patrons hopefully for many more generations.

This is indeed a fun DVD.  It's not specifically Hallowe'en oriented but in a way it is being a haunted house. I got an idea or two from seeing the mechanical movements of the characters but mostly I got inspired to create from watching it.  A lot of haunting is about direction, misdirection, calling attention to, and concealing and this DVD shows how they accomplished these things in the haunted house.

Four words...This is a treat.

What Has Lady GaGa Have to do with Halloween?

Absolutely NOTHING! Except that she's scary skinny (has she EVER eaten?). And there's a corpse at the very end.

I really don't understand this video but I somehow like it.
Concocted evilly by Mr. Macabre at 11:30 AM 3 comments:

Traipsing Through The Graveyard...

Sausage and I are a strange pair. We have been friends for 9 or 10 years now and I feel truly a part of her family. It's the kind of friendship that one can finish the other one's sentences.

I asked if she would like to go take some graveyard pictures after our walk (we walk every morning). After a quick drive through at Hardees (Carl Jr.'s for those west of the Mississippi), we went to a cemetery in town. We got some wonderful pictures and a bit of mystery (Jinkies, a mystery! Zoinks! Ruh roh Raggy!). I saw a mausoleum and being the nosy person I am, stuck my camera through the top bars and blindly snapped pictures: 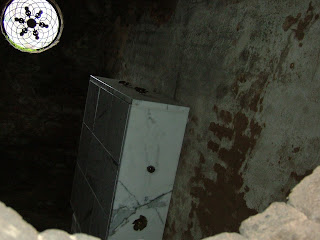 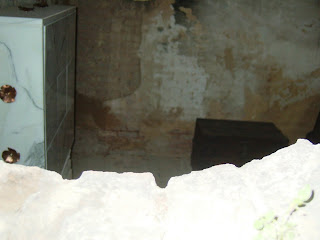 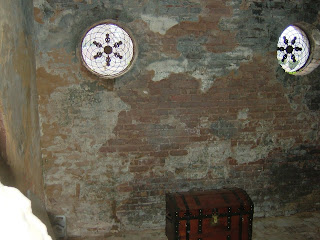 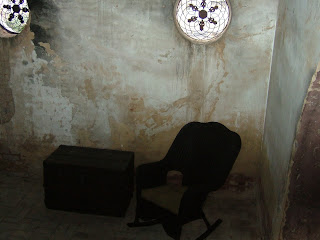 WHAT THE...Ok, there's a pirate's chest on one side of the locked crypt and on the other side is a rocking chair and another chest.
The supposed remains are on the end of the crypt, in the marble tomb.  Soooooo many questions!  What is in the pirate's chest?  What is in the other chest beside the rocking chair?  Who is the person that sits in the chair and rocks in the crypt? Are the person's remains in the marble tomb and if so, were they cremated or are there just bones in there?  Jinkies, we have a mystery!  And Freddie and Daphne, why don't you just go ahead and get a room?!
I can imagine the chair rocking slowly back and forth by itself at night.  No one in sight, just the faint creaking of the rocker in the middle of the quiet graveyard....

Some other pictures I took... 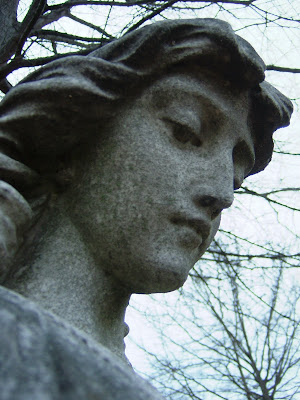 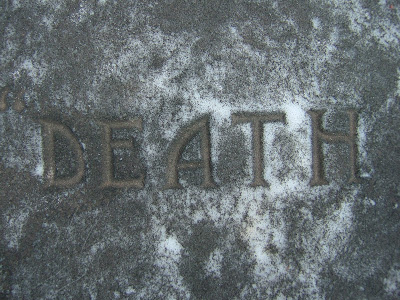 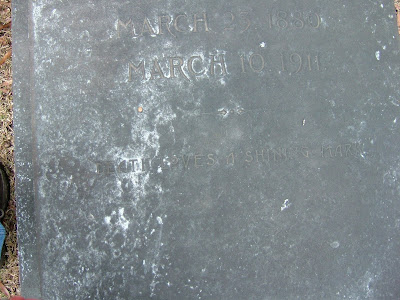 "Death Loves A Shining Mark"--Edward Young, 1683-1765
I have no inkling what it means but man, it is a cool font!  I dig the lady, her eyes look so sad and realistic. Sausage took some pictures too, but her's are better than mine so I'm not going to show them because I'm jealous.
Concocted evilly by Mr. Macabre at 9:57 PM 3 comments:

I made a new friend! 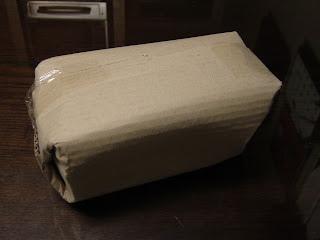 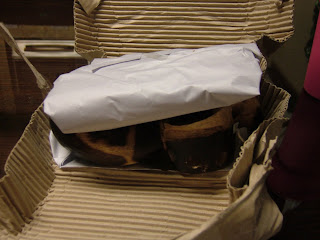 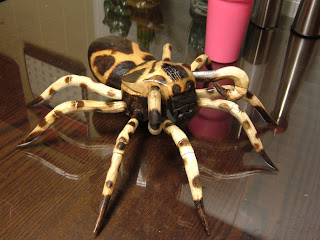 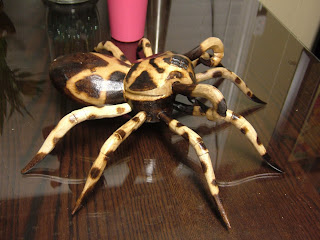 Bought this creepy big guy at Earthbound Trading Company in our mall.  Yes, he gives me the creeps.
Concocted evilly by Mr. Macabre at 6:57 PM 10 comments: 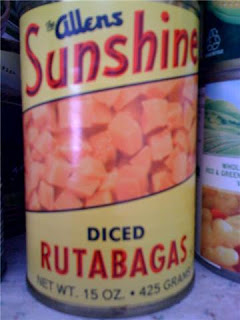 Found this can in my mother's pantry. Did you hear the screams? That was me.
Concocted evilly by Mr. Macabre at 5:25 AM 4 comments:

I'm still around, there's just not much Hallowe'eny stuff going on in January, although the cold weather has been frightening!  Gee whiz, how do you people stand it when it's subfreezing for MONTHS?!  I can't deal with all of this dry skin, bundling up and biting winds!  However, we're getting a reprieve tomorrow, rain but at least warmer.
Have some new ideas that I'm kicking around, maybe some prop tutorials, or at least some pictures of what goes on behind the curtain so ya'll maybe can use something.

A question, what draws you to click on a blog post?  Pictures?  Reviews of products?  More writing?  Less writing?  Interaction?  I personally am more drawn to a post that has a picture in it or has a catchy title.

Thanks to ShellHawk and her suggestion of the DO IT NOW! signs...the nightmare shop went from this... 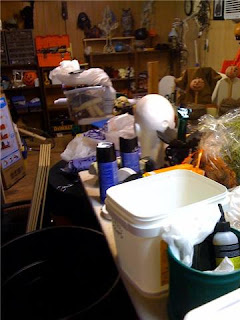 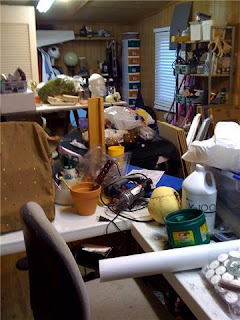 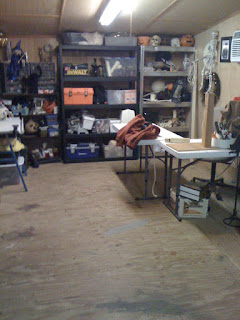 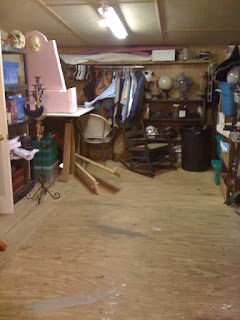 With a LOT of help from Mrs. Macabre...
Concocted evilly by Mr. Macabre at 5:59 AM 6 comments:

I was walking in the very old cemetery this evening just seeing what the Historical Society here had done to restore it to some sort of repair when I look down... 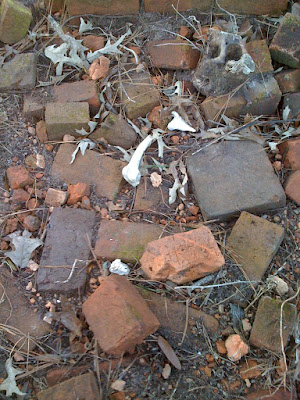 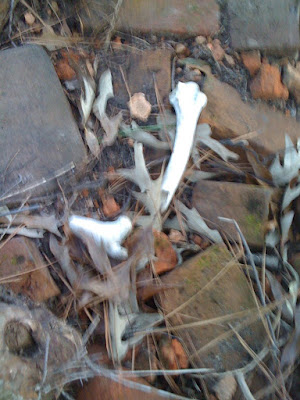 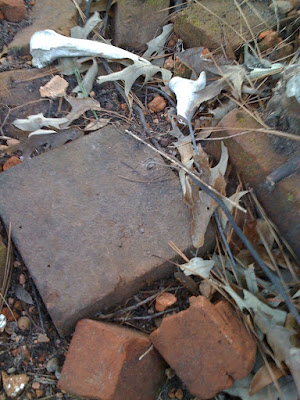 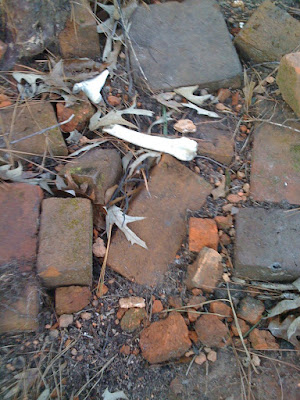 Yes they are and no I didn't.  Can you say almost overwhelming temptation?   What would YOU have done;  it's a secluded area, no one was around, it was getting dark...no one would have known......

Can anyone kinda identify what kind of bone it might be (femur? Tibia? Funny?)
Concocted evilly by Mr. Macabre at 6:03 PM 7 comments:

Oh my!
Mrs. Macabre and I went to T. J. Maxx today and when we got back to the car, a bag was tossed in my lap, "If you'd seen them you'd would have bought them."

Ohhhh Yeahhhhhhhhhh! Day of the dead tighty whities, er, reddies!  Skulls make me frisky, or is that too much information? 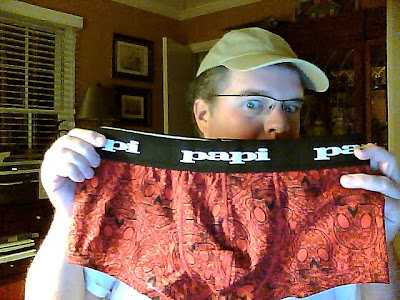 May this year bring you the best that life has to offer!

Peace and happiness to you all!
Concocted evilly by Mr. Macabre at 12:01 AM 5 comments: