My Traditionalist View of Hallowe'en

I'm a Hallowe'en snob.  I admit it.  Sure I respect chain saws, demented killers with hockey masks and possessed clowns/babies but as for me, I stick with Hallowe'en being the one night of the year where the veil between the living and the dead is at its thinnest.  Doesn't mean I get the whole alien autopsy thing for Hallowe'en but if that's your thing, go for it. I'm just an old fashioned witch, ghost, cemetery and haint sort of guy.

Kind of disappointed in the current offerings of the season.  Usually I lickity split it to Target but there is woefully slim offerings.  Same goes for Walmart and the rest of the retailers I've been to. Even Spirit was low on thing that are unique and off the beaten track. I try to find stuff that is a bit gothic, Haunted Mansion stuff and if I'm lucky, that I can incorporate into my decor year round.

I'm currently in a 1920's-1960's retro Hallowe'en mood.  You can never go wrong with a tried and true Biestle skeleton or Denneson crepe paper witch. But those things are going for the big bucks on da eBays.  Don't even think about getting a paper mache pumpkin under 100.00, it just ain't going to happen.

Luckily, we are children (and adults) of the digital age and if you hunt a little, you can find some pretty groovy stuff.

World Market has this fabulous repro jack that I had a fit over and at 19.99, it isn't too bad of a deal.  Wouldn't put a candle in it but an electric tea light or drill a small hole in the back or bottom for a C9 bulb is easy.


And some simple and elegant candelabras to display year round....

They do have some repro paper cats and stuff but if you want to find the mother load of Beistle cut outs and stuff (and they have some freebies too!!!!), go to the source!

Too many good things to show so just follow this link and get your credit card ready!

Lastly, I am a little late but I did the door last night... 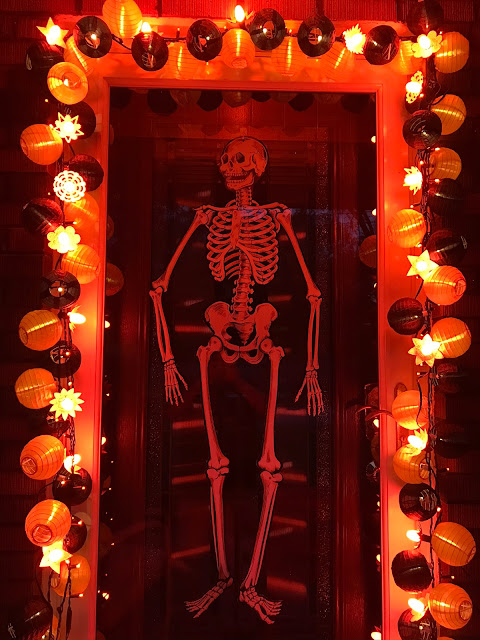 Will go into detail on the old fashioned light reflectors next post.

YAAAAAAAAAY! Glad to see you back. It seems like we all are. Can't wait to read more from you. :) --The Favorite Things Guy

Thanks so much! I really appreciate it!