The scream you heard was ME!

This is the little friend I saw in the shed yesterday (I didn't take this photo, I was busy hanging from the ceiling by my fingernails like a cartoon cat when I saw it, this is from the Florida Department of Agriculture website).  It's a Brown Recluse, a particularly nasty little spider that can do some bad damage to you if you're bitten.  Nevertheless, the pest control guy came over today and I had to let him in the shed, THE shed...the shed with MULTIPLE skulls on the shelves...the shed with a life size COFFIN in it...the shed with, oh, you get the picture.  I opened the door and just said, "Please don't judge me, just get rid of the spider."  He was unfazed, which is a good thing and set out multiple traps to see if I really did have brown recluse spiders (I DON'T GIVE A $%$#@ WHAT THE ($(^%& IT IS OR ISN'T, JUST KILLLLLLLLLLLL IT!:[consequently, my personal beliefs are that all life is sacred and to be respected...except for spiders]).

As I was working on the piano playing ghost, I was having phantom crawlies on my legs which weirded me out and every thing I picked up was inspected VERY closely.

My next door neighbor's son had/has a black widow in a little clear plastic box on his mantle.  He feeds it crickets.  I don't understand.
Concocted evilly by Mr. Macabre at 9:23 PM 11 comments:

Who's up for evil clown stalking?

Somebody have a birthday coming up?  What about an anniversary?   Forget trite chocolate, passe' flowers or dull trinkets.   There's a service in Europe where you can hire a scary @$$ clown to stalk someone all day long! That beats dinner and a movie any day in MY book!

iOvilus app from Digital Dowsing, available through iTunes for the iPhone

When you deal with the paranormal and supernatural, people usually have definite opinions on the subject and like rear ends, everyone else's one stinks except theirs.  I personally believe in ghosts, not just the ones that I make in the shop either.  I have, seen, heard, smelled, and experienced things that I simply can't explain being of the natural realm;, I'm going to be a little bit more critical of this app because of that reason.

I will tell you a little story about last night when I was on the back screened-in porch (the weather has been nothing less than glorious here lately).  While I was sitting down eating my chicken salad on bibb lettuce, the iOvilus was chatting away merrily now and then in its decidedly British accent.  It kept saying 'branches' more than usual so I asked aloud, "what about branches?" These words followed:

Branches
Behind
Iron
round
match
nice 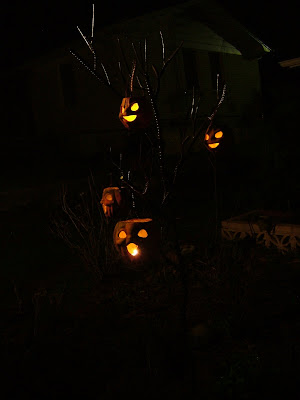 I had moved my iron rebar bottle tree filled with ceramic jack-o-lanterns into the screened-in porch and it was directly behind me.  The pumpkins are round, lit with a match and the limbs of the rebar tree are indeed branches.

Chilling.  And this is a true story, I'm not making this up.  The names Frank and Monica kept popping up as well as happy yells.  The owners of the house I live in were not named Frank nor Monica.

The only thing or two that I have issue with is the voice is sometimes hard to understand and there is NO screen showing the words as shown on the picture above; I would suppose that is in the works.  Otherwise, this is a fun app.  Yes, sometimes you get gobbledygook, but you never know.  Maybe Frank and Monica just want someone to acknowledge their presence, maybe it was all an accident, who knows?

I would definitely recommend this app.  I think it was 99 cents.  Even if you don't have an experience like mine, it's still fun to listen to it and try to figure out what it's trying to say.

And I guess that whoever it is that spoke through it, likes the tree though, that's a good thing I would think!
Concocted evilly by Mr. Macabre at 9:59 PM 4 comments:

I haven't blogged in a week or so, things have been busy with work and setting up 2 computers from Vista to Windows 7.  I basically reformatted the main computer because it had become so slow it was pitiful.  I will have to say that Windows 7 is a good operating system;  I like XP a bit better but ANYTHING is better to me than Vista (I loathed it!).
No, I'm not trying to show off my nonexistent technical savvy but if you have the means, by all means dump Vista, Windows 7 is infinitely better.
Mrs. Macabre bought me a laptop too the other day. I was stunned.  I love it.  This way I can further my quest to laziness where I can get on the internet from my easy chair!  All I need is a catheter bag and I won't have to move!  Or was that over the top?
I did get in the shop yesterday and whipped up a gift for a Secret Santa sort of thing called the Secret Pumpkin I do each year.  I made a Pot full O' Trouble for them and am going to pack some more goodies in the box too. 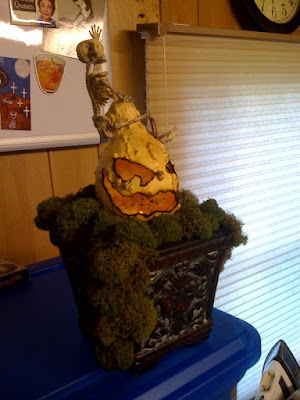 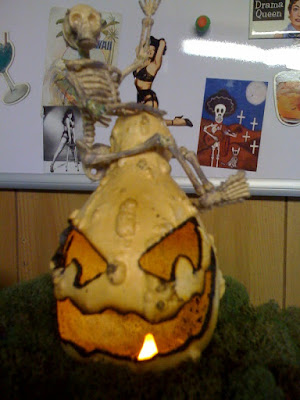 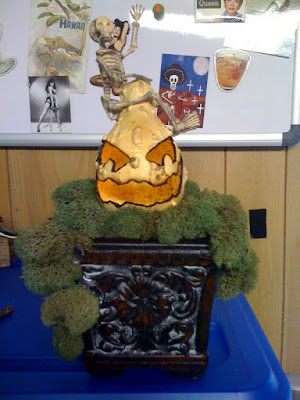 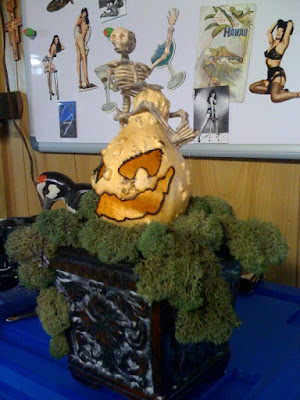 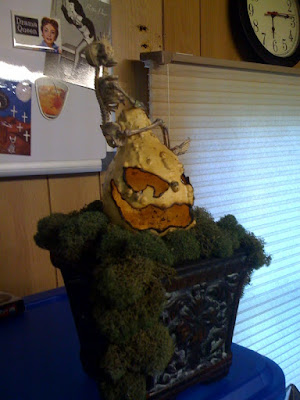 I like the little skeleton, found him in a box and decided to stick him on top.
Concocted evilly by Mr. Macabre at 6:11 AM 10 comments:

Poopy jelly bean bunny wishes you the best of Easters.

Why the &%$#@ did someone think that a wind up toy of a bunny pooping jelly beans was a good idea?  Please, someone answer this question for me so I can die in peace.

Devious.
Sneaky.
Cruel.
Sadistic.
I love you people!  You single handedly restored my faith in viscous retaliation!   In honor of April Fool's Day, I have consulted the Random.org oracle and received an answer to my question:  who is going to brutally scare someone with an Eviltron?
Melissa of Fantastical World of Holidays is going to be a very very naughty person with her new Eviltron!  For such a sweet name as Melissa, she's going to be a she-devil on someone!
One request from dear old Mr. Macabre...would you please report back the results from your scare?  Enquiring minds would love to know!
Congratulations and happy scaring!
Concocted evilly by Mr. Macabre at 12:01 AM 4 comments: